Things to Ask Yourself before Getting a New Cellphone

Are you thinking of changing your mobile provider? Here is some important stuff to consider before you make your decision.

Either you're looking for a cheaper phone plan, a new phone or just looking for better coverage where you live, changing cellphone providers gives you a chance to step up your phone game.

Unfortunately, it can feel like the least fun sort of homework to wade through all the marketing buzzwords in cellphone plans. We broke down the process into the six most critical questions that you should think about before switching, to make things easy.

Should you go to prepaid?

If you want to save money with your new carrier, prepaid carriers have some of the cheapest phone plans anywhere.  You will only pay your monthly bill up front instead of after. A lot of carriers also give some nice discounts if you prepay multiple months at a time. This is one of the best ways to save money on a cellphone plan.

There are companies called mobile virtual network operators, or MVNOs. This means they piggyback off the major networks - At&T, Sprint, T-Mobile, and Verizon - rather than having to use their own cellular towers.

The common knowledge dictates that these MVNO's have worse coverage compare to the companies that operate using their own network. However, in reality, a lot of customers are more satisfied with MVNOs service. Based on a Consumer Reports survey with their 103,000 members, MVNOs almost always scored higher than cellphone providers who operate their own network.

Do you need a new phone?

The best perks of changing to a new cellphone company are you usually can pick up a free phone. However, the sad thing is most of these phone deals are mostly with major carriers. And, if you go with a prepaid plan you might have to go with an older phone if you want a free one.

Time to go with 5g phone?

You have seen a lot of commercials about 5g connection, all of the cellphone providers put out once already in the past years, saying they have the best 5g coverage. However, the truth about 5g is a little bit more complicated.

The next generation of wireless technology is still not accessible anywhere but AT&T, T-Mobile, and Verizon have all made great strides on their 5G networks. T-Mobile users in the U.S. were linked to 5G 54 percent of the time in October, compared to 18 percent for AT&T and less than 1 percent for Verizon, according to Ookla tests.

But wherever we are in the 5G race at present, there's no debate that it's the future. It's worth factoring in your preference if you're looking to switch mobile phone providers. In all of their unlimited plans, AT&T, T-Mobile, and Verizon incorporate 5G coverage, and when you start a new line, you will even get good offers on 5G phones.

It's a no-brainer to open another one with your new provider if you're still on a family plan with your current cellphone business. But if you've just been looking at the new plan's one-line accounts, it's worth bringing a few people together who may be interested in switching as well. Savings can be immense.

What's more, with each line that is opened, phone offers for new customers are usually available. Therefore if four individuals initiate a new family plan, all four will probably be able to get dramatically discounted phones in the transfer.

You don’t always need to have one account-holder handle the bill every month, either. Carriers like Visible Wireless let each line manage their own account, so you can skip the frantic Venmo requests at bill time every month.

Who has the best coverage?

Although most individuals switch carriers because of expense, it can also be a good chance to boost your coverage. T-Mobile and Verizon typically take the first spot in most third-party surveys, with AT&T coming in last. Here's how the networks are ranked by some of the big analyses:

Of course, just because one carrier scores well overall doesn’t mean it will be the strongest in your specific area. We recommend checking out each of their coverage maps to find one that has a strong network where you live. 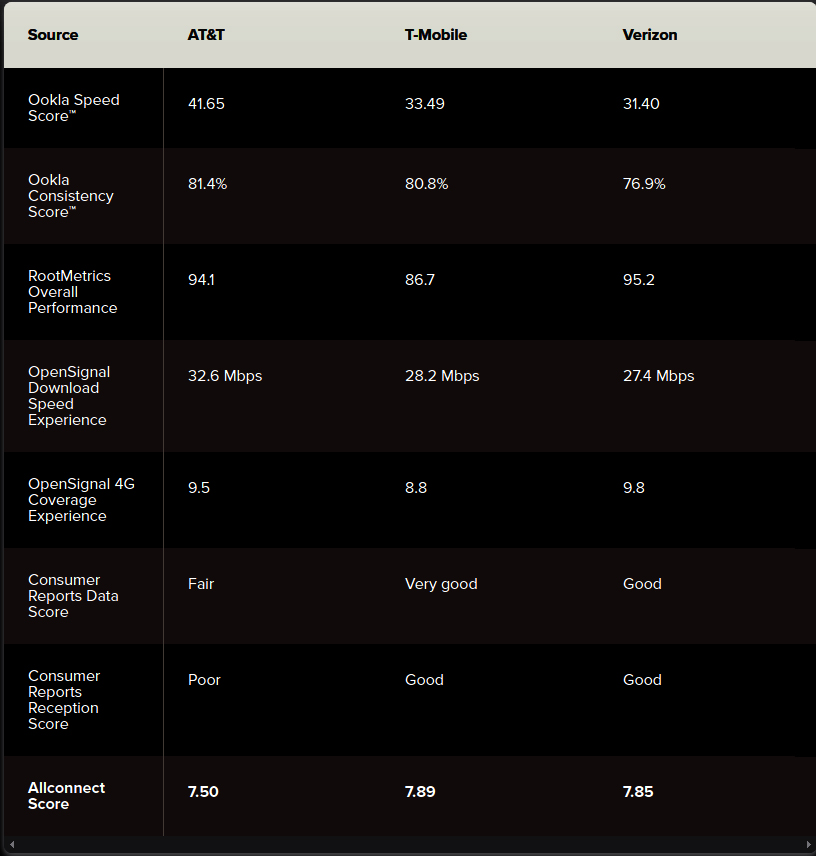 Bear in mind, it can use one or more of the networks above if you go with a prepaid carrier, so it's always a good idea to verify its coverage before you sign up.